Are You Sure You Want to Move Out? 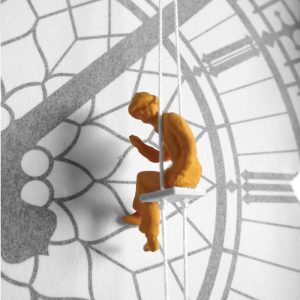 A striking series of eye-catching 3D and graphic works inspired by London’s most popular landmarks, by interior designer and artist Marta Mrugala-Kramarczyk. Are You Sure You Want To Move Out?, captured Marta’s love affair with what she calls “the world’s greatest city”.

Marta’s designs are strongly influenced by her up-bringing in Poland during the country’s communist era in the late 1970s and 1980s. This is expressed in two ways.

Firstly, through her precise treatment of form and use of vivid colour acting as a counterpoint to the grey concrete environment that surrounded her as a child.

Secondly, as result of the very limited access that the majority of the population had during that time to quality art materials and to workshops. This prompted her to develop her own design language, developing skills and imaginative approaches to produce creative work almost “out of nothing”.

This work was developed further when she studied interior design in the early 2000s at the Academy of Fine Arts in Wroclaw – one of Poland’s most important universities. Her studies gave her access to the old Polish School of Posters, which have in turn defined her present approach to graphic and interior designs, which are minimalistic and visually arresting in their simplicity.

Marta has lived in London since 2007 and works out of her studio in Bermondsey.

More from Half Moon